The secret and far off world that surrounds the ancient Egyptian kings is a fascinating topic that has captured the attention of many scholars throughout the centuries. True, with such intrigue, mystery and interest, it would have been foolish for the minds behind our online casino games not to capitalize on such an appealing topic. So the creators invented the Pharaoh's Kingdom Scratch, and we can safely say, that this one a good call on their parts since our audience just can’t get enough of this one! If you are enamored by the ancient civilization that has been around longer than almost any other recorded peoples in history, then follow us for an adventure you won’t soon forget! 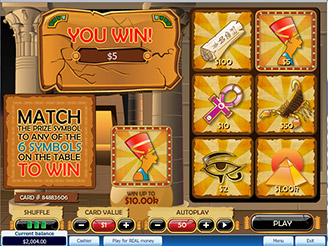 The Pharaoh's Kingdom Scratch offs have a somewhat unusual look and feel to them. If you have ever played our Top Trumps Celebs and the Kong, the Eighth Wonder of the World online scratch card games, then this style will be familiar to you. The set up is simple. You have two columns with three squares in each one for a total of six squares. Each square contains a symbol, though you cannot see the icon until you have paid for that round. The goal is to match one of those six symbols with the symbol that appears in the deity’s bust to the left of the grid. The amount displayed below the icon is how much you’ll be taking home with you if you win.

So what are some of the symbols we’re talking about? Well, there are the ancient pyramids, the ominous eye of Ra, deadly scorpions, sandy scarabs, godly felines, and various ancient Egyptian pieces such as urns and headdresses. Any of these can appear on the six squares, but only the one that matches the prize square will be a winner.

The function buttons are pretty basic when it comes to the Pharaoh's Kingdom Scratch offs, so if you have played at our online casino before, you’ll be familiar with the arrangement. Play is the way to start the round, though, auto play is wildly more popular. This feature lets you just click and go, while the system runs through round after round, racking up your fun points as well as your cash level. The shuffle button tells you that you are getting a unique experience whenever you want it, and the value can be adjusted to suit your purse strings or your mood. Ready to play? Let’s go!