Daring Dave & the Eye of Ra is a five reel, 20 line online slots version that will catapult you straight into all the action in an Egyptian pyramid, on a quest to uncover the mysterious Eye of Ra that lies deep within. Help the main character avoid the booby-traps that pyramids are famous for, as you spin the reels, and unlock special features and bonus rounds to get to the ultimate prize. 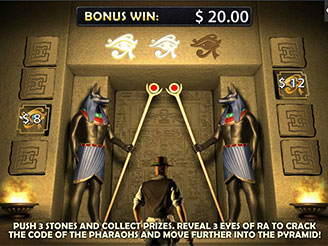 Exciting Bonus Round At Daring Dave & The Eye Of Ra

One of the things that makes Daring Dave & the Eye of Ra one of the most sought-after online casino games is the fact that it has a progressive bonus round, meaning that you have three levels to get through in your quest, and if you fail, you’ll pick up where you left off the next time you unlock the bonus round. So there is no back-tracking in this pyramid! The status of your quest is stored per total wager, so when you return to that total bet amount again, you’ll reactivate your previous quest status.

To unlock The Quest for the Eye of Ra Bonus, you need to land the bonus symbol, which is the pyramid, anywhere on reel one and reel five. Each of the three levels in this bonus round requires a task to be completed by our brave adventurer. Once the task is completed, you (and he) move closer to the prize and further into the pyramid. Along the way, you’ll earn prizes in the form of cash as a reward for your efforts. Even if you leave the gambling arena and return, you will resume your adventure from where you left off.

Once you reach the end of your journey and have found the ancient treasure within, you’ll be awarded with 75x your total wager!

The symbols of Daring Dave & the Eye of Ra are all in the ancient Egyptian theme. The wild is our Indiana Jones-type character himself and if you land five of his symbol you’ll be rewarded with 5,000 coins! If he hits reels two, three and four he acts as an expanding wild. Being a wild, he substitutes for all symbols except for the scatter and the bonus symbol.

When you play Daring Dave & the Eye of Ra at Mansion Casino Canada, the premier online casino, you are guaranteed an adventure. If you’re looking for some more action-packed, big payout versions, then come check out others like Fantastic Four 50 Lines and Farmer’s Market, just to name a few.