Re-live ancient Japan in this action-packed online slot, where you can join forces with the brave Samurai warriors, battle against the sinister ninjas and try to claim the giant jackpot of up to €25,000! With exciting gameplay, high-quality graphics and enjoyable music, it’s sure to provide great entertainment to any online games player. 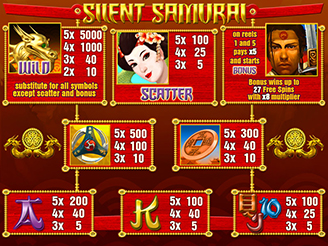 Journey across the ancient East and spin the oriental reels full of geishas, samurais and throwing stars, and you could be heavily rewarded. Hunt down the massive jackpot by discovering 5 wild dragons on the reels, and if you catch 5 geisha scatter symbols you’ll be rewarded with a whopping 100x your bet, up to a colossal €45,000!

Unlike the scatters in many other online slots, the geishas in Silent Samurai do not activate the sought-after bonus round. Instead, keep your eyes peeled for the powerful samurai himself! If you catch him on reels 1 or 5, he’ll immediately reward you with 5x your bet and the chance to win a massive 27 spins with an 8x multiplier.

When you enter the bonus feature you’ll be up against the samurai’s arch enemy, the dangerous ninjas, in a thrilling battle for huge rewards. Pick out ninjas from the selection in front of you and if they explode, you’ll either be awarded with spins or multipliers. Keep an eye out for the attractive magic ninja, who will explode an additional 3 ninjas for free! But be very wary of the evil ninja, as if you hit him the feature will come to an end.

Whether you’re a novice to slots or an avid player, this thrilling casino game will certainly entertain and set your adventurous side loose. Head to our online casino today and begin your epic escapade, and see how much you can win!