Play Battle of the Gods Online at MansionCasino.com

Get ready for an epic battle as the Titans rise up and challenge the Gods in this head to head clash for control of the universe in the Battle of the Gods online slot game at MansionCasino.com. This game is a punters dream with a long list of bonus features that are geared to help you win more money. The graphics and animations are also flawless, which just adds to the enjoyment level for many. 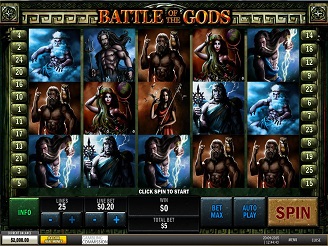 Spinning on the reels are 3 sets of Gods and Titans, a wild, and a scatter symbol. The Wild provides the top payout with a jackpot of up to 10,000 times the line bet. The highest paying regular symbols can pay out up to 400x your bet.

There are several bonus features to be on the lookout for. The first is the X feature, when the Gods appear on reels 2, 3, and 4 in an X formation, you will receive an additional payout of 5 times your bet.

The Temple of the Gods scatter symbol will trigger an exciting bonus feature when there are at least three anywhere on the reels. The feature begins with unlimited spins in God Mode. Here you will only see God symbols, and the Titan wild symbol. Once that Titan appears on the reels, the game will switch over to Titan Mode. The Titans will give you 8 free spins, and, with the exception of the God wild, only Titan symbols will remain on the board. If the God symbol lands on the middle reel, you will revert back to God Mode. You can go back and forth between the modes, until you complete the 8 free spins in Titan Mode without getting a God wild symbol.

Play Battle of the Gods for Real Money at MansionCasino.com Today

You can start out the Battle of the Gods with up to an extra $/€5,000 in your account when you open an account at the internet casino and collect your Welcome Bonus. Battle of the Gods is available in both the Instant Flash Casino and by downloading the online casino software.

You don’t have to choose sides between the Gods and the Titans, just enjoy playing to win real money when they do battle at MansionCasino.com