Play Around The World Arcade Online at Mansion Casino UK

The world is filled from corner to corner with new and interesting places, sights to see and wonders to be astonished by. The trouble is, of course, that making a journey across the globe is a tremendous expense both in terms of money and time. Most people just don’t have either of those resources in enough abundance to enjoy that kind of holiday. Well, you needn’t hang your head just yet, because we have an alternative for you to try. Why not play Around the World at our online casino, and give yourself a snapshot of some of the greatest locales there are? It won’t fill your photo albums, but it just might fill your wallet! 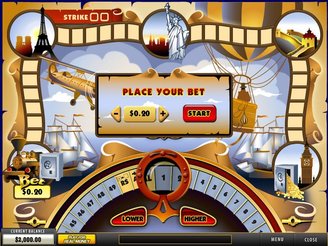 Around The World Features

Around the World is based on the many and varied landmarks that are found throughout the world. You are an adventurer going on a journey, and the screen is the map that you will follow. The game area is bordered by some famous spots such as the Eifel Tower, Statue of Liberty and Big Ben, all standing tall and standing proud. The actual gaming console is a steering wheel with a numbered wheel going around. Once you press spin, the numbers will start reeling, and the winning digits will appear in the scope once everything comes to rest. The design is creative and colourful, and it really gets you into the mood of travel.

How to Play Around The World

The goal of Around the World is to properly predict whether the next number spun will be higher or lower than the previous one. Let’s say you spin a seven. Chances are pretty good that the next number will be higher, so you click on the higher icon to the right of the scope. The seven is recorded on the strip that runs around the screen, as are all the numbers that come up throughout the game. Now the wheel is spun again, and you get to see if you’ve surmised correctly. Each time you answer correctly, you get to advance to another level. When you hit one of the famous sights icons, you’ll be given the option to cash out or keep playing. The more advanced on the line the icon, the higher the payout will be. For example, the Eifel Tower pays less than the Great Wall of China.

One other thing that makes Around The World one of the funniest casino games, is the fact that you get two strikes before the game is over. What’s more, when you reach a goal post, your strikes are cleared, and you start fresh! Want to see the world? Let’s take a trip today and play online arcade games!