Get into the stadium and score loads of goals in Football Mania Scratch. The winnings are big and the field is pumping with all the action you would expect from the big league. 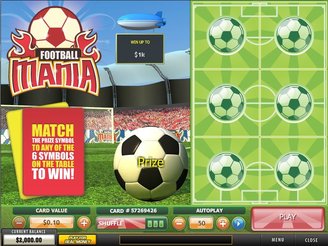 Football Mania Scratch is no ordinary scratch card game. All you need is one symbol to match up with the symbol in the soccer ball to the left of the card. This soccer ball’s symbol changes for each card so you’ll never know what you’re aiming for until you rub the ball away to reveal the symbol underneath.

The card itself is made up of six blocks which are covered by a soccer field and balls. When you play the game you’ll be rubbing away this layer to reveal the symbols underneath. Like we spoke about, if one of these hidden symbols matches the soccer ball’s symbol, you’ll be the winner! Each symbol in the card has its own cash amount, so you’ll win the amount that corresponds with your winning symbol.

Playing Football Mania Scratch is way easier than winning the champion’s league. You don’t need to even be a pro to play the game, never mind to win! It’s so simple and straightforward that even amateurs who are just starting out with online casino games can be successful. It’s mostly up to lady luck in this pastime, so you just need to place your bets, press a couple of buttons to get the online casino game going and keep your fingers crossed! But this game does have the special shuffle feature, giving you more of a say on the outcome than lady luck would like you to have. By shuffling your cards around you could be changing your fate at the touch of a button. Will you land up with more winning cards?

You can either be very hands-on when playing Football Mania Scratch or you can automate the game by playing in AutoPlay. If this is your preferred way to play, then you can even choose how many rounds you want to automate up to 50 rounds.

If your muscles need a little rest from all the sporting activity, feel free to choose the ‘Scratch All’ option which is very popular amongst players, because it saves you from manually rubbing away each of the six blocks as well as the ball symbol. That’s a lot of scratching!

And when you reveal a winning symbol, you’ll be up on your feet cheering all the way because the online scratch card games payouts can get massive! Play for your chance to score time and time again at Mansion Casino UK