The major difference between these two games are the players that you’ll find on the symbols. Legends like David Beckham and Jurgen Klinsmann are no longer on the reels and in come new stars like Lionel Messi and Wayne Rooney. Mega star Cristiano Ronaldo is the games wild symbol.

Top Trumps World Football Stars 2014 is played across 15 paylines and has several bonus features. In addition to the two three soccer stars above you’ll get to see Bastian Schweinsteiger, Andrea Pirlo, and Iker Casillas on the reels as high value symbols. 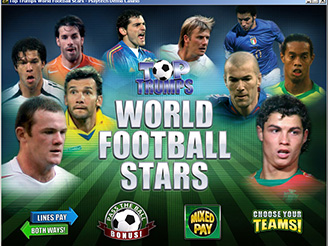 In addition to the high value symbols above, there are two more special symbols that can really take your game to the next level. The Top Trumps logo is the Scatter symbol in the online slot game. When you have at least three showing on the reels at the end of a spin you will win 10 free spins. You can choose from a list of your favourite players to appear on the reels as an added wild symbol that will give you a 4x multiplier for any win it takes a part in.

The Gold Medallion bonus symbol is what’s needed to get you into the vaunted Hall of Champions. When it lands on reels 1 and 5 you will be shown images of 16 of the sport’s biggest stars. You get to click on three of them to see what prizes you will receive.

Lastly, if you want to try and increase your win total, try playing the Gamble feature. This can be played after any win and is a double or nothing card game. You’ll be taken to a screen with a single deck of cards and one card face-up. If the next card to be drawn has a higher value, you’ll double your winnings. If it’s lower, you’ll lose your winnings from the previous spin and have to go back to the reels empty handed.

You can play Top Trumps World Football Stars 2014 at the casino online in Practice Mode just so you get a feel for the game and see how often you can trigger a bonus feature. However, if you want to keep your winnings you’ll need to open an account and start playing for real money. To do so, simply transfer money into your new account via any of the secure UK approved payment methods and you’re ready to go. You’ll even receive a Welcome Bonus of up to £200 that can help you get started.