There are lots of people out there who dream of swimming through a dolphin reef with these magnificent beings (and not in a mob scene type of scenario!) These creatures are majestic, intelligent and friendly, and interacting with them in the open water is something of a fantasy world brought down to Earth. Well, you can bring that adventure to fruition, or as close as you can get to it without actually getting wet, in Dolphin Reef, the exciting slots online that features these noble creatures and a few other underwater friends. Take a look at some of the specs, and see if this is where you want to spend your next vacation. 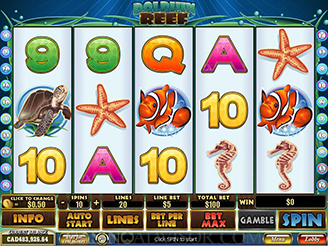 Dolphin Reef features five reels with twenty paylines to open and close at will. Actions proceed as follows: You open the lines that you wish to use during that round. It is best to limit your paylines if you are new to the arena because you will be increasing your overall bet with each line that is used during the round. You don’t want to overshoot your first few rounds. First get the hang of the play, and then you can start handling some heavier loads. Next place the bets that you are willing to wager. While there are so many opportunities for creating winning combinations, and it is easy to score the bonus points, there is no guarantee that you will win. So only bet an amount that you are comfortable losing in case of a fail. Once all the details are settled, you can just push spin to get the Dolphin Reef machine moving. Winnings will be calculated and added to your total bankroll. It’s as easy as that!

Here are some of the paying combinations that you will need to score a victory. Obviously the lovable mammal himself is the wild card for this machine. If he shows his smiling face on reels two and four simultaneously, you will be rewarded five free games. In addition, you will receive an exciting bonus wild

Other characters include colorful fish, treasure chests, starfish, sea horses and the usual royalty and high cards. Clown fish payouts are phenomenal, scoring you a tremendous five thousand units when you get five of these guppies. Turtles are also big payers in this version. You can get one thousand units for a row of five turtles! The other symbols aren’t as generous, but they’ll still give you a win in the right order.

The bonus round for these slot games is a little different than the average themed machine. The level has a distinctive poker flavor to it. In this round, cards are shown at the center of the screen alongside two buttons one labeled red and one labeled black. The object of the bonus round is to guess whether the next card displayed will be, as you might have suspected, red or black. If you guess correctly, your earnings are doubled! Isn’t it time you discovered the greatest casino online in South Africa has ever seen before? Step inside Mansion Casino now, and experience the difference for yourself!