Can you imagine the luck and skill that it takes to jockey one horse to victory in a major horse race? How about seven? That’s the challenge that Frankie Dettori had one a sunny day at Ascot back in July of 1996. Not only did he successfully win all seven races with seven different horses, he also became a legend.

You can try and recreate that magical day with some luck of your own when you spin the reels in this 25 payline casino game. The symbols on the board include the different shots of Frankie Dettori, one of the trophies he won, an overview image of the Ascot race track, a horseshoe, the finish line and the Magic Seven logo. 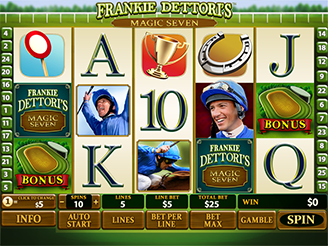 The bonus symbol is the overview of the Ascot racetrack and when it lands on reels 1 and 5 you will trigger a potentially lucrative pick-and-click feature. You’ll head out to the racetrack where you’ll have 20 spots on the track to click on, of which you can choose six of them. You’ll either reveal a cash prize or a multiplier. When the multiplier is found, you will be treated to one of the highlights from the big race day.

The Magic Seven logo triggers the racing bonus feature. This is a free spin feature, but the number of spins is based on which of the three horses you choose, and how they fare in the race. The third place horse receive 10 free spin, 2nd place gets you 15 and the winner enjoys 35 free spins.

There are two progressive jackpots that can be won at random while spinning the reels in this online slot game. They are called Golden 7 and Silver 5, while the selection process is random, making a max bet can help you increase the odds of getting selected. Once you are selected you’re guaranteed to win one of the two jackpots, the winning jackpot is determined by your skill in finding either the gold or silver trophies.

Frankie Dettori’s Magic Seven Jackpot is an exciting casino game that can be played Real Money Mode. The difference is obviously instead of just feeling excited when you hit a bonus feature or get a set of matching high value symbols, when you play in Real Money Mode, that money gets added to your account instead of just imaginary money. So open your account and make a deposit today and we’ll also give you a Welcome Bonus of up to £200 to help get you started.