Explore a frozen world crafted around the mythos of Scandinavia in Ice Cave, an online slot from Playtech. Many online slots have explored Norse mythology in the past, it’s something that always translates well to this medium and always goes down well with players, and Ice Cave is a perfect example of that.

Ice Cave is available on the Mansion internet casino, where it can be played via download, mobile and web. It is a 5 reel and 20 payline slot that offers some big features, great graphics and some slick animations. 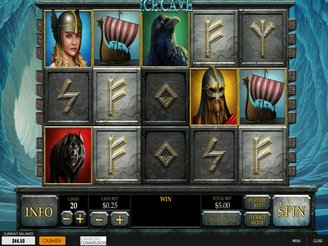 Ice Cave Online Slots can be played for as a little as £0.20 for all 20 paylines, but players looking for micro-stake play can simply reduce the paylines to 10, bringing the total cost down to £0.10. Ice Cave has a “Feature Bet” function. The latter of these options adds an additional 50% cost to each spin, but also enables additional wilds on the final reel.

There are a number of high paying illustrated symbols on Ice Cave, with the biggest based on famous Norse characters. Jarl returns the most, giving players a payout of 250x their line bet for a full payline. This helmet-clad warrior is closely followed by Valkyrie and Fenrir, who return 100x, and then by a raven and longship, which pay 75x each.

The basic symbols on Ice Cave Online Slots are also unique to the game. Instead of using the classic symbols of 10 to A, they opt for Norse symbols that represent wealth, joy, protection, victory and power, further adding to the immersive world that Playtech have created.

There is also an ice wild symbol, which multiplies winnings by 3x and remains on the reels until a hammer wild symbol lands and breaks them up. The hammer wild symbol also boosts wins by 3x. These symbols form the main bonus feature on the Ice Cave online slot and interact in a unique way that you have not seen on any other game on any top casino on the internet.

The ice wild symbols are present on the third and fourth reels, with the Feature Bet also adding them to the 5th reel. When they land, they freeze the reels in place for all subsequent spins, and they are only removed when the hammer wild appears on the second reel, at which point the hammer breaks the ice and the reels return to normal.

If you want to play Ice Cave and other top slots online, then sign up to the Mansion internet casino and try your luck today. There is currently a Welcome Bonus of up to £200 available to all new members who deposit for the first time.