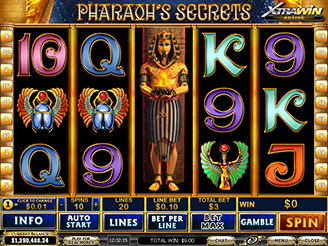 Pharaoh’s Secrets has 5 reels and 20 paylines, and is packed with wild symbols, scatter symbols, multipliers, spins, a gamble game, and a bonus game.

How to Play Pharaoh’s Secrets

Pharaoh’s Secrets is based on standard online slots rules.

The game is available for free or real money, allowing players to bet a maximum of 10 coins per payline.

The Pharaoh is the wild symbol in this online slots game. Accordingly, it creates winning combinations by substituting for all other symbols across the reels except scatters. It also transforms into an expanding wild during spins.

This special feature is activated at random in this online slots game, provided players activate all the paylines. If the Xtra Win Mode is activated, players have to stake an extra 50 percent of their total bet amounts. During this feature, the wild becomes an expanding wild.

The Pyramid is the scatter symbol, which pays irrespective of its position on the reels. The appearance of 3 or more scatters triggers the Pharaoh’s Secret Bonus Game.

Players will be prompted to choose one of the three displayed symbols, after which special reels will appear across the game screen and players will receive spins according to the number of chosen symbols displayed.

Pharaoh’s Secrets also has an optional gamble game triggered whenever players make a payout, challenging players to double their payouts.