We may not be able to pronounce it properly, but that doesn’t mean we don’t enjoy playing Zhao Cai Jin Bao! It seems the more time passes, the further Playtech reaches to bring us fantastic reels to spin and this is just one more example of that. With this exciting online casino games they have reached across the world to China and created a combination of colours, sounds and images that brings the Far East straight to you in a winning group of reels. 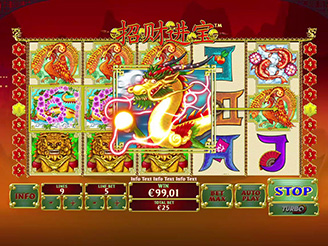 The symbols in Zhao Cai Jin Bao are the most beautiful part (though the relaxing background music could compete for that spot) and even the basic nine through ace found in most slot options are displayed here in a delicate manner in which they almost look like Chinese characters combined with images that match the theme. Add to that the strikingly depicted images of fish, birds, Chinese masks, dragons and others featured and you’ll be drawn to these reels again and again.

While this slots option is only five reels and nine paylines (as opposed to some of the other much more complicated and extensive gaming options) it has a certain intrigue to its gameplay that is not common among the reels. For starters, there is an interesting feature here in which the paylines pay both ways; right to left and left to right. And if that wasn’t enough, the wild symbol here which is the bearded Chinese man, can take the place of all symbols to help with winning combos – including the scatter! And when he does help make a winning set, he also doubles your win! The scatter (shown here as a golden hat) is also a nice added bonus as when it appears on the reels at least two times, it adds multipliers to your winnings!

You can discover a fantastic selection of exciting games in our casino online, all available whenever you are!