Deal Or No Deal International at Mansion Casino online casino UK is based on a TV game show of the same name, well known throughout the world in the many different versions and languages to which it has been translated since it was introduced in the Netherlands back in 2000. It’s a simple game show in which the contestant gets to choose from a number of suitcases or boxes which contain certain amounts of money or cash prizes. The player starts with a case in their possession (the value of it is unknown) and each case that is chosen from the rest gets eliminated from the prize options and its value displayed. Later on in the game the contestant may be offered cash or other prizes instead of the case in his possession and he will have to consider whether or not he thinks the case he is holding is worth more or less than what the banker is offering him. Sound exciting? We thought so, too. Now just imagine this in a casino games online version! 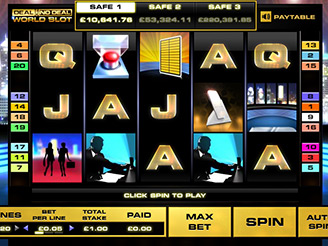 How To Play Deal Or No Deal International

The five reel and 20 payline version of Deal Or No Deal International takes the game show and turns it into an exciting online slots game that will keep you on the edge of your seat. You’ll start, as usual, by setting the amount of lines you want to play and the value of your bet per line. If you’re unsure of how this game works, you can always start out in free play mode and play with our money until you’re ready to start putting your own coins on the line. Once you’ve set things up, you can either press the “SPIN” button to spin the reels once or the “AUTO SPIN” button which will keeps the reels spinning and the game going for up to 99 spins with just that one, single click.

The symbols here really keep the mood of the game going and just as an example, the telephone is the scatter symbol and a minimum of three of them on the lines at once will activate any one of the following fantastic bonus features: