Join Robocop as he battles crime in dystopian Detroit. This Playtech slot takes inspiration from the classic 1987 film, a Box Office smash that ignited a passion for bionics and law enforcement in every 80’s child.

Playtech are no strangers to online slots based on films and film franchises, but they have pushed the boat out here in tackling one of the most iconic action films of all time, and it’s worked perfectly for them. The Robocop slot takes place against a backdrop of the OCP headquarters, with symbols that include characters from the film, as well as police cars, guns and badges. 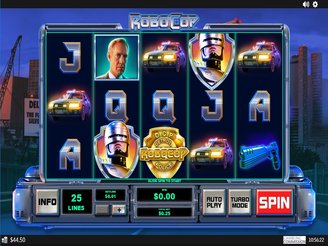 The highest paying symbol on Robocop is the wild, and this is closely followed by Robocop himself. These two return a maximum amount of 2,500x and 1,000x respectively when they fill a payline. Robocop has a very slick, futuristic feel, and fans of the film will be delighted to see some iconic scenes, illustrations and animations—almost as happy as they’ll be to discover this slot is based on the original film and not the sequels or remake.

The Robocop slot can be played on download and mobile. It has 5 reels and 25 paylines. Robocop can be played for a minimum of £0.25 per spin, and on each spin there is a chance of unlocking one of several bonus features. These include the following randomised features:

There is also a free spins bonus feature on Robocop Online Slots. This gives players the choice between a number of bonus features, offering anywhere from 5 to 15 free spins with a varying amount of multipliers. The free spin features mirror the first 3 free spin features that we mentioned above, only there are many more of them. There is also an OCP Mega Bonus, which follows the same format as the standard OCP Bonus but with additional multipliers.

You can find the Robocop slot, along with many other online slots and casino games, on the Mansion internet casino.

What’s more, if you sign up for Mansion Casino UK and make your first deposit today then you can claim a Welcome Bonus of up to £200!