There’s something lurking down below and it comes with some otherworldly powers. Yes, it is that ancient Egyptian Mummy that you’ve heard so much about, but there’s something else too… It’s your own special brand of good luck, the kind that’s going to overpower even the Mummy himself and take over the hidden treasures. 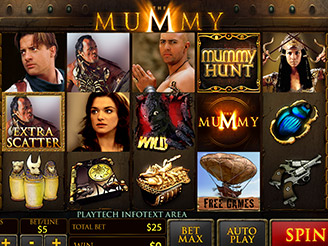 All of this is happening right here, right now in The Mummy slots online. You won’t need to travel to Egypt to see what’s happening in this ancient pyramid. You can experience it all from your very own home.

More About The Mummy

This game is based on the Hollywood movie that was a legendary hit. The cinematic effects that you can experience in this online casino game are so realistic that you’ll not only feel like you’re in the movie, but you’ll even feel like you’re right there amidst all the action!

The symbols include all the famous faces from the movie itself but the star of the show is the bandaged skeletal Egyptian who really has it in for anyone who tries to steal from his tomb. But don’t worry, he’s not all that bad. In fact, if he likes you, he’ll show up on the reels as a wild symbol and help you create winning combinations. But just make sure to stay on his good side!

There’s also a scatter symbol in The Mummy slots and it’s the logo of the game. Like any good scatter, it will pay you out multipliers no matter where it lands on the reels, as long as you have enough of them.

There are a couple of special bonus rounds in this game, which is one of the reasons why it’s so popular at our casino online.

The Lost City Adventure Bonus is triggered at random during the game, which makes it all the more thrilling because you don’t know when it’s coming. In the round, you’ll be offered ancient boxes. Pick and win cash, and also each time you’re in this bonus round you’ll trigger a special feature of the game. Find out all about these special features from the paytable.

Another bonus round is triggered when you land the bonus symbol on reels 1 and 5. In this round you’ll be hunting bandaged skeletons to win some cash. Not an easy feat but well worth it!

You can also win spins in The Mummy slots. All you need to do is land the spins symbol on reels 1, 3 and 5. This will earn you 5 spins and one special super-spin. Just wait till you see what that is!

Even if you never thought of yourself as an Indiana Jones type of adventure-seeker, you’ll still be enthralled by this slots game. It’s got something to appeal to everyone so get down into that tomb right now!