Mansion Casino offers a great list of online casino games, such as the popular Dollar Ball progressive online slots like Golden Tour, Alien Hunter, and Football Rules. These slots can be played in Practice Mode as well as Real Money mode, but the Dollar Ball side game can only be played in a real money game. 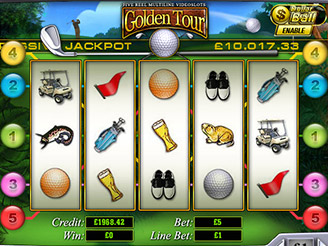 The highlight of Golden Tour, a 5-reel slot, is the optional Dollar Ball side game. Golden Tour also comes with a number of other lucrative features.

The objective of this online slots game is to create a winning combination of symbols by spinning the reels of the slot.

The rules of Golden Tour are simple.

Golden Tour has 3 scatter symbols — the gopher, catfish and duck.

The appearance of 3 or more of these symbols anywhere across the reels triggers the bonus game feature.

The bonus game prompts players to choose a golf club, with the resulting swing determining how big the prize is.

The two balls symbol acts as a wild and can substitute for the white ball and the orange ball, depending on what makes the most lucrative combination.