Team up with the Justice League in this heroic superhero slot from Playtech, the kings of superhero slot machines. Playtech have created online slots based on many of the characters you’ll find in this game, including Superman and Batman, but in Justice League Online Slots they have brought them all together for one big adventure.

And with Mansion Casino UK, you can join in with the fun! This is just one of many casino games you can find on the Mansion internet casino, and one that you can play on web, mobile and download. 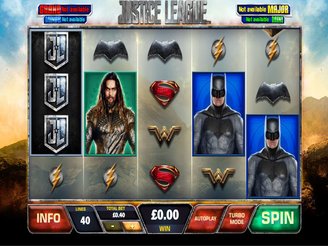 Justice League Online Slots stars some of the biggest names in the DC Comics universe, including the Man of Steel and the Caped Crusader, who it’s fair to say are the stars of the show, as well as The Flash, Aquaman, Wonder Woman, Green Lantern and Martian Manhunter. The Superman symbol pays the most, returning a huge 300x win for players who land 5 on a single payline, but there are also big wins for Batman, Wonder Woman and The Flash, with other members of the Justice League following close behind.

Superhero online slots rarely disappoint when it comes to big bonuses, and Justice League is no exception. There are several bonuses to look out for:

Power-Ups: The superheroes become stacked on reels 1 and 5, sandwiching all other symbols in the middle and increasing payout potential. All superhero symbols and wilds on the middle reels are locked-in while everything else is spun again.

Free Spins: There is an attack on the city of Metropolis and it’s up to you to stop it! This bonus feature is triggered by landing 3 of the Daily Planet symbols, at which point 10 free spins are activated. Extra wilds appear and there is also a chance to unlock some power-ups.

Gamble: Every winning spin offers players a chance to “gamble”. This feature activates a card game where players can attempt to go double/quadruple-or-nothing by guessing the outcome. This feature is activated by clicking the symbol next to the “spin” button, but it can be ignored if preferred.

You can play this Playtech superhero slot game at the Mansion internet casino, and if you sign up and deposit today then you can also claim a Welcome Bonus of up to £200!

Mansion Casino UK has a wealth of other casino games for you to play, including many more Playtech online slots. So, sign up today to join Batman, Superman, The Flash and friends in their latest earth-saving mission. Metropolis needs you!