Football Rules is a delightful multiline online slots game, which has an optional progressive Dollar Ball Jackpot game attached to it. This game, along with other Dollar Ball slots such as Haunted House and Golden Tour is available at Mansion Casino for real play. 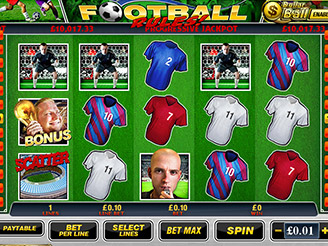 Football Rules has 5 reels and 25 paylines. The game is associated with the popular Dollar Ball progressive jackpot side game.

Other attractive features of Football Rules include a wild symbol, a scatter symbol, and spins.

Players only have to place a bet, spin the reels, and create winning combinations across activated paylines to win payouts according to the online casino game’s payout structure.

Here are the rules:

The Football Hooligan symbol is the wild, which can create winning combinations by substituting for all other symbols across the reels except the scatter symbol and bonus symbol.

The Stadium scatter symbol pays irrespective of its location across the reels.

If the bonus Trophy symbols appear on the first and last reels simultaneously, the bonus game gets activated.