Earth is in danger and who better to call upon to save its skin than the greatest hero of all in this exciting online slots version of the 2013 remake of Superman. On the outside he’s the geeky, bespectacled reporter Clark Kent, but on the inside he is Kal-El from the planet Krypton which is on the brink of self-destruction. Unlike other Krypton residents, Kal-El is born naturally without the use of genetic engineering and is sent by his parents via rocket to find a safe place to live as their planet heads towards catastrophe. As we all know, he ends up on Earth, landing in Kansas where he is adopted by a childless couple. Life isn’t easy though, especially when General Zod and his badass gang turn up after escaping from exile on their Black Zero spacecraft, looking to wipe out the human race and establish a new Kryptonian colony on Earth. 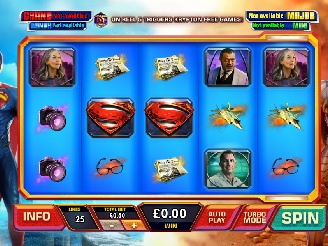 Reach for the Skies with Man of Steel

Man of Steel is a powerful and visually stunning new addition to the collection of online slots games at Mansion Casino UK and contains plenty of great bonus features. While you’re flying round the world at the speed of sound you’ll come across many of the main characters from the film such as Superman’s adopted parents or newspaper chief, Perry White.

The game is also littered with symbols related to the film, like spectacles, a newspaper and a camera, but the main action centres around Superman and General Zod. When these two appear as wilds either together or individually in the base game, they shift across one reel at a time for every new spin. But when they appear on the same row, the Battle for Earth Free Games feature is activated which involves an almighty battle in the skies. Extra wild symbols are generated for every fight and the more battles Superman wins, the greater the rewards. Seven spins are also yours when the Krypton bonus scatter appears on reel five, a feature which contains expanded reels and 50 pay lines. Players can get up to 10 locked wilds for the duration of free games. There’s so much happening in this super game, including four progressive jackpots, you’ll need nerves of steel if you’re going to save the world!

Time to Play the Hero in Man of Steel

You don’t need a stick of Kryptonite when you venture into our fun internet casino at Mansion Casino UK, nor will you ever need to strip off in a phone box to change into your Superman outfit when you play our slots online. Instead, you can simply enjoy our games online or download our casino app and then either play for free in Practice Mode or receive a Welcome Bonus of up to £200 when you make a deposit and try to win real money.