Silver Bullet is one of the numerous dollar ball progressive slots online available at Mansion Casino Canada, one of the best online casino for Canadian players. Those who enjoyed playing Silver Bullet can also play fascinating slots such as Highway Kings and Captain’s Treasure and other casino games online in the fun/real money modes. 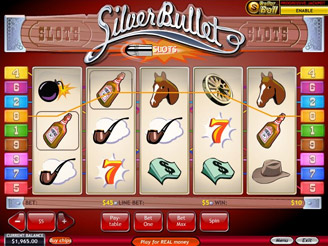 Silver Bullet features a Western theme, 5 reels, and 9 paylines. It also has lucrative features such as a dollar ball progressive pot, a wild symbol, and a scatter symbol. Playing Silver Bullet is easy because it is based on standard slots rules where the player has to place a bet or use the Bet Max option to place the maximum bet, activate the desired number of paylines and hit the Spin button to start the game. If the reels display a winning combination when they stop spinning, players will be paid according to the game’s payout structure.

The Sheriff Badge is the wild symbol; accordingly, it can substitute for other symbols across the reels except scatter symbols in order to create winning payouts. Players who use the wild to create a winning payout will get double payout for that combination.

The Colt Revolver is the scatter symbol, which pays irrespective of its reel location. Players will be rewarded for combinations of 2 – 5 scatter symbols.

The most lucrative feature of Silver Bullet is its progressive dollar ball side game, which can be activated by placing an optional side bet worth $1. The progressive pot comprises a seed value of 10,000 coins plus 10 percent of every wager placed on the game till it is won. Players can win this jackpot by matching five chosen numbers with five numbers drawn randomly by the software.