There is nothing better than being able to take a free shot when there is no one guarding the goal. Unfortunately, that’s not the opportunity you are being given today, but we can give you the next best thing. As the striker for your team, we’ll clear the field of all the other players. The only one you’ll have to worry about is that hotshot goalkeeper who thinks he is the stuff. Think you can maneuver your ball past his pensive gaze? Only one way to find out. Load up Penalty Shootout now, and give it your best shot! 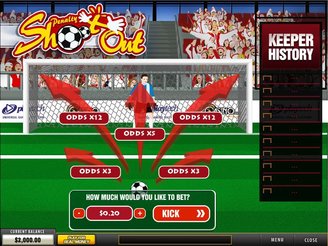 Getting to Know Penalty Shootout

The Penalty Shootout arcade game online is set up just like a real football match. The fans are watching from their seats, the goalkeeper is standing pensively in front of the goal, and then there is you. The star striker for the nationally acclaimed __ (fill in the blank with your favourite football team)! Ready to make your mates proud? Then aim right, and kick it out. That’s the basic gist of this online casino game. Now here is the breakdown for those who haven’t played it yet.

How to Play Penalty Shootout

You have five options to choose from when deciding where to sink the ball, and choosing correctly might make all the difference. The payouts will vary depending on which position you choose to kick to, and you can read them clearly on the screen before each kick off. Decide whether you want to kick to the upper left or upper right, lower left or right or straight down the middle and over the other guy’s head. Once you’ve decided how much to wager and which shot to take, just press kick to punt that ball into orbit. Watch your progress by keeping an eye on the keeper history log at the side of the screen.

This online casino game doesn’t have a whole lot of fancy features, flashing extras or technology-driven gadgets. And, quite frankly, most of our members feel like that’s just the way it should be. After all, this is a real sport, not some new age, techie number crunching game. Cut away all the frills, and what’s left is the heart and soul of the real sport, and that is where the fun really lies for many gamblers out there and in Mansion Casino especially. Are you ready to play football the way it was meant to be played; man to man? Then get in here, and kick that ball out of the stadium today!