Take a ride on the spookiest attraction at the fair with Fairground Fortunes Ghost Train, an online slot from Playtech. If you like your online slots a little spooky and very colourful then this could be the game for you as it’s one of the brightest and boldest casino games you will ever play.

There are 5 reels on Fairground Fortunes Ghost Train Online Slots and a total of 20 paylines, with the potential to unlock even more. There are all kinds of ghostly symbols to find, including a ghost with big black eyes (the highest paying symbol) an eerie bumper car, and an ominous bouncy castle. 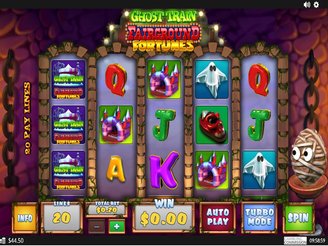 Fairground Fortunes Ghost Train is available on web, mobile and download, with a built-in Turbo Mode and Autoplay to help things move along nice and quickly. You can play this online slot for as little as £0.20 and as much as £20 per spin, which means most stake levels are catered for.

There are a few bonus features to look out for here, including:

Find this game on the Mansion internet casino and try it out for yourself! Fairground Fortunes Ghost Train is one of the many online slots available on Mansion Casino UK, and if you sign up and make your first deposit now then you can get a Welcome Bonus of up to £200.

Your bonus can be used on this slot or any of the other casino games on Mansion Casino UK - take your pick!