It’s a Memorial Day celebration like you’ve probably never seen. Inspired by the Mexican Day of the Dead (or Fiesta de la Memoria in Spanish) this online slot game will celebrate the dead with skeleton symbols and three bonus features from beyond the grave.

Fiesta de la Memoria is a 20 payline casino game that can be played by downloading the internet casino software or via the Instant Flash casino at MansionCasino. The high value symbols are a group of bony friends who are celebrating the Fiesta de la Memoria by spinning on the reels and trying to help you win big. The orange skeleton is the high value symbol with a payout as high as 250 times your line bet.

The game also includes a wild symbol, a female skeleton with a rose, that is worth up to 500 times the line bet in addition to substituting for other symbols to create a win. 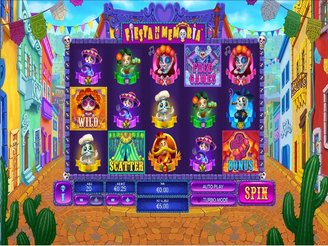 Nothing says a celebration quite like a bonus feature, and since this is a Fiesta, we’re thrilled to see three bonus symbols that can be activated in this slot game online.

The Mariachi feature can be triggered with three scatter symbols landing anywhere on the reels. This is a multiplier feature and to find out how big of a multiplier you’ll receive you need to spin the Bonus Wheel.

The Altar Bonus is activated when at least three bonus symbol land on the reels at the end of a spin. This is a pick-and-click style game that will only end when you choose an object that reveals the word “collect.” The longer you can remain in the feature, the bigger the prizes will get. There are up to 6 levels in this feature.

The third feature is known as the Festival Games feature, it is a free spin round and will begin when there are free spin symbols on the middle three reels. The feature begins with 12 free spins and some extra symbols being placed on the reels. One of the symbols is a skull, and it can increase the number of spins you’ll get to play when it shows up on the reels.

Death is not a sombre event in some cultures, and in Mexico they choose to celebrate their dead, which makes Fiesta de la Memoria such an exciting event. The online slot game comes with two modes, Real Money and Practice. It’s always a good idea to play a few rounds in Practice Mode before making a real money bet.

To make a real bet you will need to open an account and make a deposit – you’ll also receive a Welcome Bonus up to £200 – and then you’ll be able to play for, and hopefully win, real money celebrating the Mexican Day of the Dead at MansionCasino UK.