You don’t need a lot of paylines to make an online slot game exciting. Just take a look at the five payline Stars Ablaze slot game at MansionCasino UK. With a potential jackpot of up to 7,500 coins, you’ll be sitting on the edge of your seat with every spin.

Based on the name of the game, you might be expecting a space themed game, but you’d be wrong. Like most classic casino games, this is a fruit based game, that also has the important star symbol. The high value symbols are cherries, an orange, a lemon, some blueberries, and a watermelon. There is also a lucky number 7 which has a payout of up to 2,000 coins. The blazing star is highest valued symbol, you’ll need five in a row in order to win that 7,500 coin jackpot. 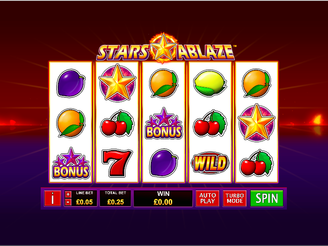 You can start spinning the reels in Stars Ablaze at MansionCasino UK for as little as 5p or as much as £500 and pretty much anything in between. With such a great betting range it’s no wonder this game is played by punters of all levels.

There is a Wild symbol on the reels that can substitute for any symbol on the board to create a win, with the exception of the bonus symbol.

The bonus symbol is the key to playing in the games lone bonus feature. You’ll need it to land on reels 1, 3, and 5 and that will bring you to a pick-and-click game. You’ll have a bunch of symbols on the screen to click on, each revealing a different cash prize. The feature will end when you pick up a symbol that says “”Collect” on it. Then all the cash prizes that you collected up until that point will be added together and placed in your account.

If you want the money that goes into your account to be real money, you’ll need to open an online casino account, make a deposit, and play in Real Money Mode. This is an easy process, and we’ll give you a Welcome Bonus of up to £200 once your deposit has been processed and placed in your account.

Reach for the stars, or the tasty looking fruit, and spin the reels in the internet casino game Stars Ablaze for real money today.