Is bigger always better? Not necessarily, but when it comes to the latest addition to the Mansion Casino Canada slots collection, Jungle Giants is an experience of epic proportions! Developers all over the world are striving to be the biggest and best at what they do – Playtech having pretty much nailed it with their latest outing! 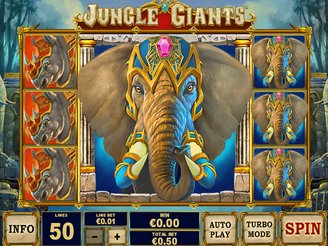 The keyword with Jungle Giants from start to finish being ‘big’ – enormous animals as the stars of the show, massive playability and the potential to pocket plentiful payouts. The spins bonus round is undoubtedly where the real action is, but even the game itself promises a rumble in the jungle on a higher level!

Don’t let the relative simplicity of the visuals fool you – Jungle Giants is an online slot game that means business. The layout is simple, there are no fancy animations to distract you and the artwork as a whole is relatively stripped-back. All of which is underpinned by the kind of toe-tapping jungle beat that’s guaranteed to be stuck in your head for days after you play!

But all this simplicity isn’t accidental – instead it allows for total focus on gameplay. Which is, in a word, superb. There are 50 paylines in total to play for, with spins starting from $0.50 and going right up to $500 each. So whatever your bankroll and risk appetite, you’ll be right at home with Jungle Giants!

The red gem symbol serves as the wild and can take the place of any other symbol in a winning combination, with the exception of the scatter. It’s also one of the most valuable symbols in the game – five in a row on a winning payline being worth a whopping 1,000X your bet! The rhino and elephant symbols are also pretty lucrative, paying 100X and 75X respectively for a combination of five.

As for the scatter, you’ll need to land the game’s logo on the middle three reels at the same time to enter the spins bonus round. Along with 8 spins to play with, all of the low-value symbols are removed to improve your chances of pocketing a prize! Only giant symbols can land on the middle three reels and the spins can be retriggered an infinite number of times as an added bonus!

With its mobile-optimised design, Jungle Giants is ready to do the business across pretty much every mobile device. Desktop gamers can choose from our free download version or use our flash version for instant access on the web. Mansion Casino Canada is your home for amazing and exciting online casino games at home or on the road.